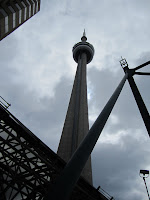 My Mom and Cousin Evelyn came for a week on May 1st, and so Emily and I took them into Toronto (A newly-learned trick for us, as we had only explored the subway with Alex a week prior.  The weather up till May hadn't made us particularly anxious to be pedestrians for fun before then.  Plus, as you know when you live somewhere, you usually only ever explore its culture, architectural attractions, etc., when you have out-of-town guests.)

Anyhoo, one fine Wednesday morning, we made our way to the packed parking lots of the nearest station on the Toronto Subway line (Kipling, as it happens); and found the one remaining space left by 10 a.m. and got ourselves onto a train into downtown Toronto. 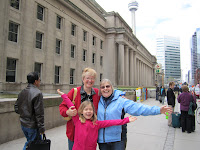 Here's us near Union Station, attempting to get Emily to stop chasing the pigeons by suggesting we all pose for photos: 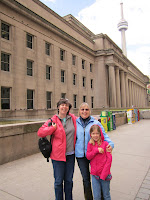 And then, we found the base of this incredibly tall structure (originally built to solve a growing telecommunications problem, as Toronto's skyscraper building boom of the 60's produced structures that blocked broadcasting signals).

Cheesy tourist shots after we shelled out all those Canadian dollars for tickets up to the top were a must, of course. 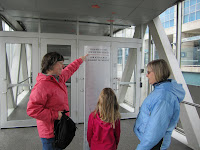 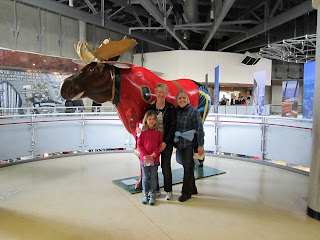 And then, after a moderately long wait at the elevators, and an interesting journey up (FYI:  There was a glass wall on one side of the elevator - which meant a more comfortable journey up than doooooowwwwn, I thought.) 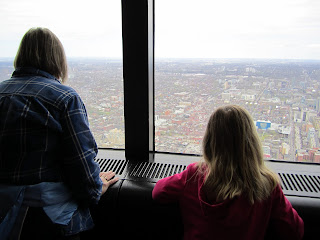 I am using the zoom quite a bit in many of the shots, as I wanted to be able to recognize individual buildings, so we're quite a bit higher up than some of the following photos suggest. 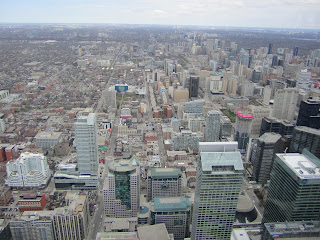 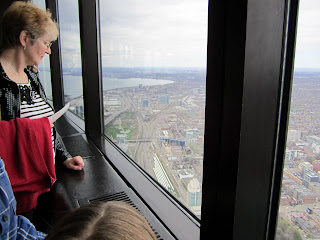 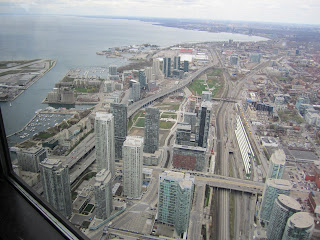 The next two are interesting - we're looking down into a sports stadium (the convertible kind!) and also out at the Toronto Islands (We take a ferry out to these a couple days later.) 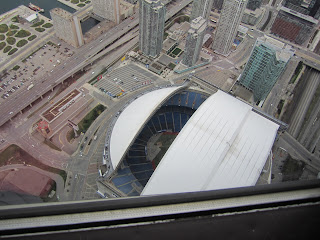 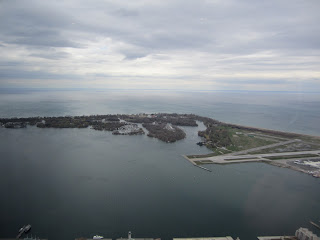 And after we had oooohed and ahhhhhed and my Mom pointed out nearly every building in downtown Toronto (reminiscing about how great it was to live in Toronto, even though she had no money for shopping and couldn't go out much, saddled as she was with a toddler and twin infants) and I attempted to photograph planes landing and taking off from the small runway on the Toronto Islands (Really neat to watch - like you have your own model plane set!), we next thrilled ourselves a bit with the glass floor. 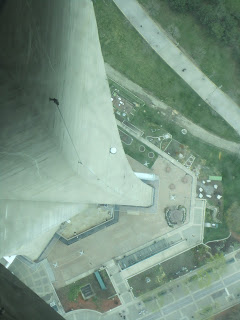 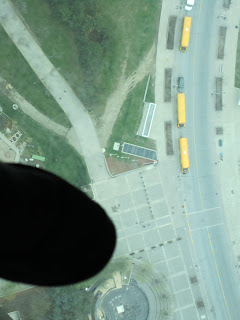 If you have any sense of imagination at all (and are not especially into adrenaline highs), it is very difficult to treat this glass floor as . . . well, as a floor.  Emily and I attempted to achieve what the young gentleman in the following photo achieved with a rather nonchalant air. 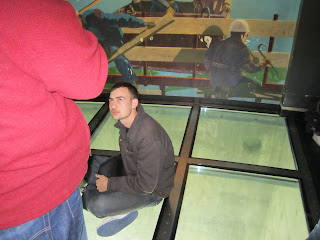 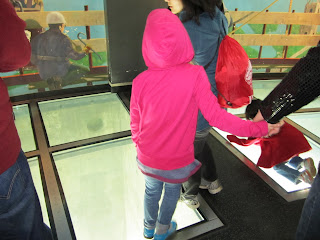 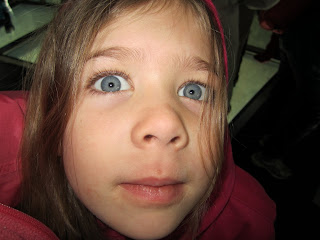 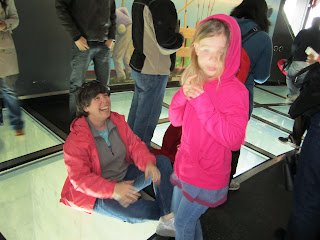 And then the camera battery ran out of juice . . .
Posted by Heather Chapman at 1:38 PM